Even though you’re going to the strip club, there’s still a code you have to adhere to when it comes to dressing yourself.

If you don’t show up in proper strip club dress code, you often won’t be granted entry. This is especially true on busy nights in Las Vegas.

Don’t get sneaky either: if you change your clothing once inside, you’ll most likely be asked to leave. Every strip club has an image to uphold, and its own sets of rules.

Rules aside, there are a lot of benefits to dressing up nice and showing up “dressed to impress.”

We’ll go over all those benefits here.

(P.S. If you’re in a hurry – there’s an infographic below with our 6 strip club dress code rules).

Can I Wear Sweatpants?

Don’t roll your eyes. This honestly happens a lot more than you think where guys show up to strip clubs in their sweat pants or even pajamas. As a general rule, most clubs won’t let you in. Some clubs however, depending on how dead it is, the time of day, or how business is looking, will actually let you in.

The dancers probably won’t be too impressed with your choice of attire, and they’ll definitely think you have ill intentions with those sweat pants on. We believe as a general rule, you should just avoid wearing sweat pants altogether. You don’t want the reputation as the “sweat pants in the strip club” guy.

As a Common-Sense Rule

You can apply the same general rules of those school dances you used to go to and apply them to strip club attire. Imagine that you’re going to an interview and the attire is business casual: that’s probably the best practice you can use when going to a strip club.

The above may be a lot to digest. If looking for a quick and dirty guide to getting in smoothly at all the strip clubs in Las Vegas, look no further.

Remember these six simple rules of the strip club dress code and you’ll be good to go basically every time. Unless you somehow really pissed off the bouncer. 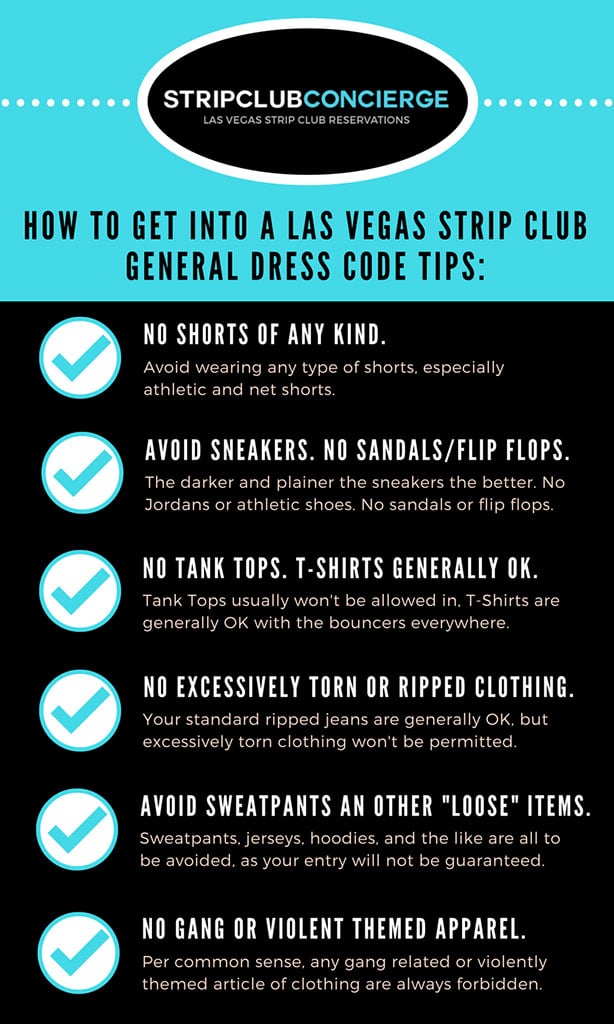 General Things to NOT Wear in a Strip Club

Again, all of these things are subject to change and will depend on what the strip club dress code is at that particular venue. Here’s some general hard rules to follow:

If you wear any combination of the above, you probably won’t even get past security. They’ll tell you that you can’t wear a certain item or whatever it is that you’re wearing, and that you have to go home and change before you can come back.

Most clubs are nice enough to let you in if you go back to your hotel and change into proper strip club attire, but its a much better practice to ask about the attire before you go to the club. Most hotels will give you a full comprehensive list of different strip clubs and party clubs that give you the attire of what’s allowed and not allowed.

Do a quick inventory of your group’s attire before rolling out.

You probably have your heart set on one venue in particular. In that case, we’ll go over some of the top Las Vegas strip clubs and their particular dress codes.

Don’t see yours below? Feel free to contact us directly at 702-755-1766 with any questions we can help answer.

Treasures is a very high fashion place, sporting a top notch steakhouse inside. While they’re pretty lenient on what you can wear, there are some things you can’t show up in:

Like Sapphire, the dress code at Crazy Horse III is pretty strict and the bouncers are serious about who gets in.

Spearmint Rhino is a little more relaxed when it comes to their dress codes but they still have some rules.

Hustler Las Vegas is known as an after hours party spot as well, as a world-class strip club. Here’s management’s top rules:

Wrap Up (No Pun Intended)

Each strip club dress code tends to be roughly the same. If you just follow the common-sense rules of going out and trying to impress hot girls, you’ll be just fine and you’ll be allowed inside.

These clubs have an image to uphold, and if they start letting dressed-down people inside it could signal to others that the quality of the venue is rapidly diminishing. Everything is at the strip club’s discretion.

It’s ultimately up to the bouncer working the door whether or not you get into the club. At the end of the day, they don’t have to let you in even if you’re dressed appropriately, so keep that in mind. Showing up with a proper attitude also helps, along with bringing plenty of cash. 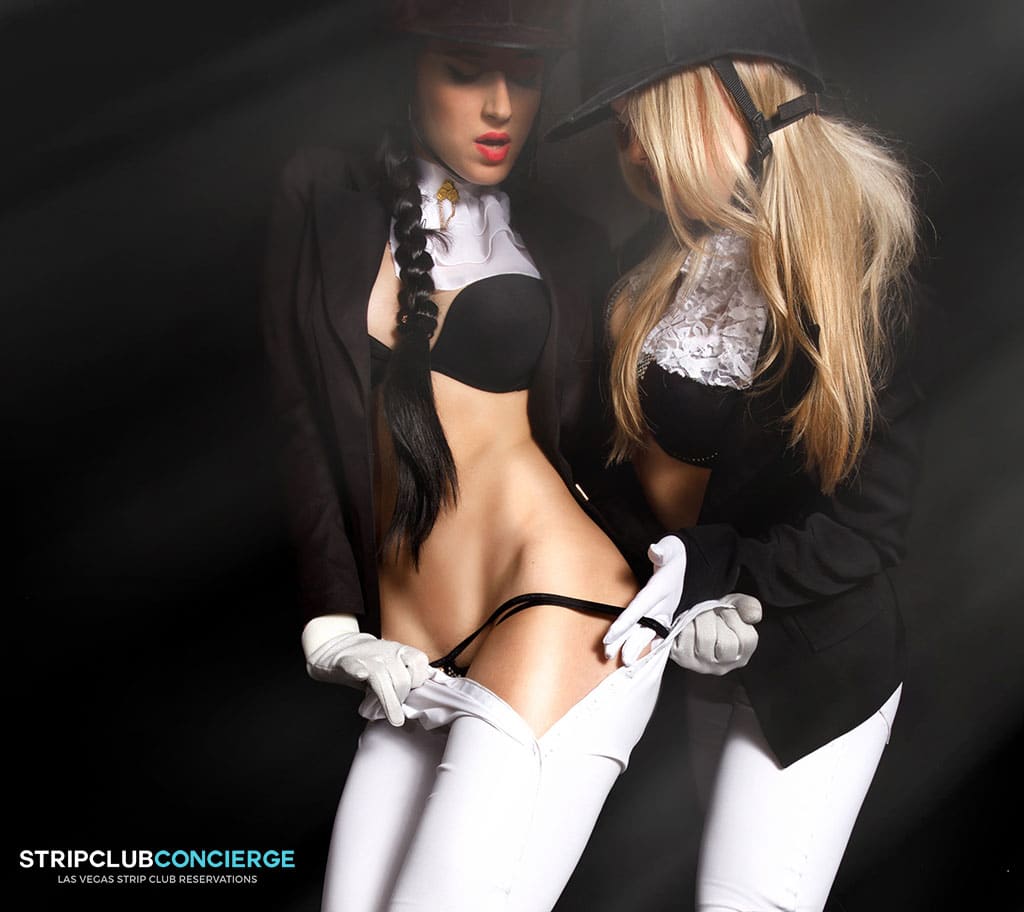 We hope we saved you a trip back to the hotel to change.

If you’re worried about the type of pants you’re wearing revealing a little too much during a lap dance and rubbing against the dancer, don’t worry. You aren’t going to be in trouble, and she won’t be grossed out unless you start actively rubbing or grinding against her to make it obvious.

Always try to contain and control yourself, regardless of what you’re wearing – because the idea of you finishing during a lap dance is what the dancers definitely won’t like. A nice pair of jeans or even business pants will always do just fine. Be smart and be classy. Ditch the sweatpants and grab the slacks.