For people who are inexperienced and don’t normally frequent strip clubs, what exactly is proper strip club etiquette?

You’ve probably heard some horror stories of people being kicked out or thrown out on the street for certain things done inside. Well, first of all, relax.

Bouncers aren’t going to literally pick you up and throw you out onto the street. Maybe in some back-alley strip club in a rough area, but not in Las Vegas. If you don’t understand Vegas strip club etiquette, you’ll simply be escorted out.

No one wants to waste their night like that, so it pays to be in the know. 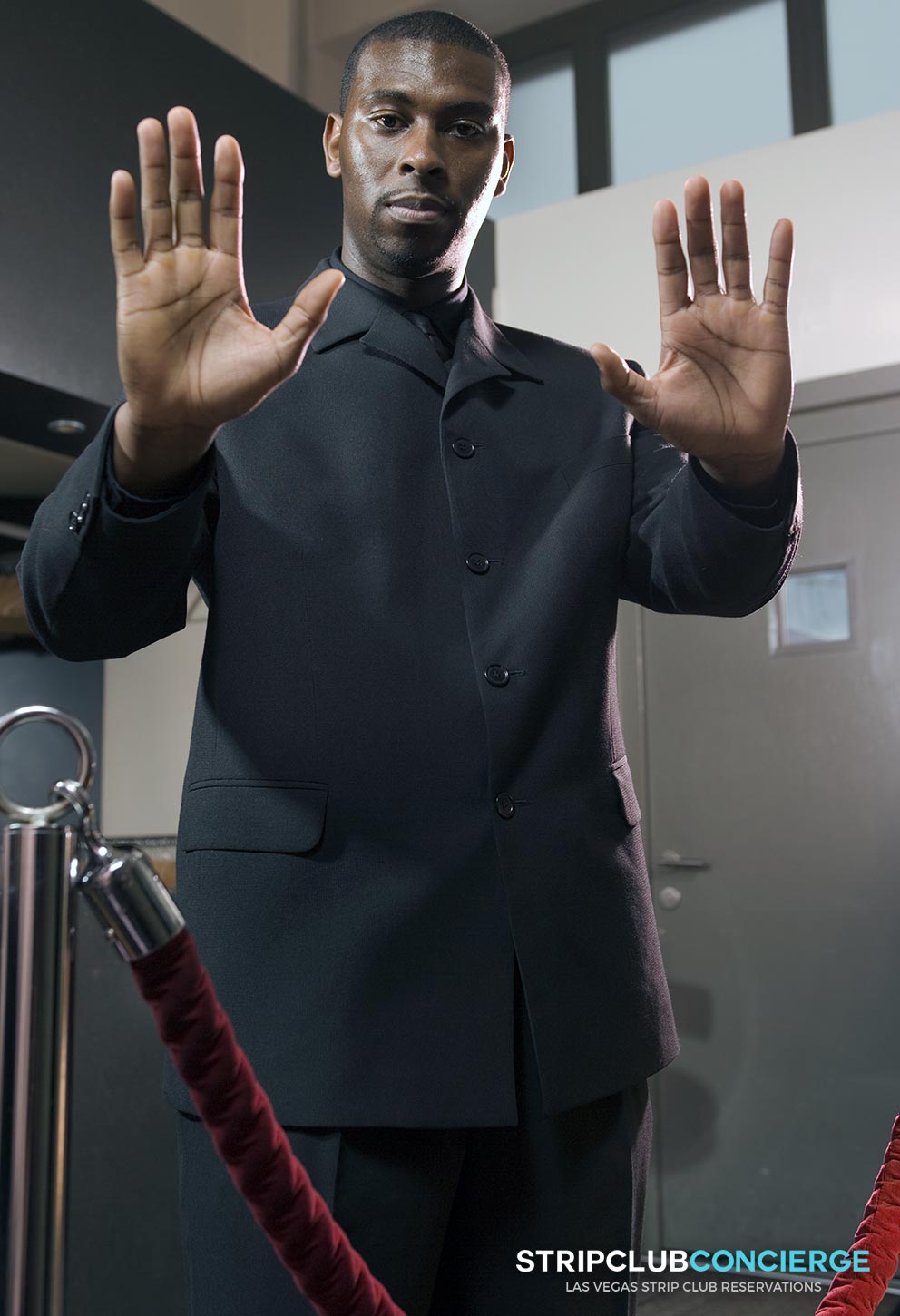 We’ll help you you make this guy smile.

Obviously, you should always want to avoid getting kicked out. So we’re going to fill you in on some of the most common Las Vegas strip club etiquette rules, and how you can avoid breaking them.

Following or breaking the rules is what determines if you have a good experience or a bad experience. If it’s your first time, don’t be afraid to ask the staff. Like with many things in life: if you’re friendly, they’ll be friendly. They would much rather have someone asking what the rules are rather than acting inappropriately only to claim they “didn’t know” they could do that.

These rules of strip club etiquette apply to everyone, not just the first timers. They also apply to strip clubs in Vegas as well as other cities. Knowing how to act right in Las Vegas will almost guarantee you’ll know what to do in any other city.

Whether you’re a regular strip club VIP customer or a first time strip club newbie, you need to know these 11 commandments of Las Vegas strip club etiquette and standard rules.

Dolla, dolla bills. And lots of them.

Try not to be a leech or someone who just sits in a chair not ordering anything. As a patron, the club is relying on you to patronize the establishment, and this is why a lot of clubs have a drink minimum rule when you enter the club.

Some people will actually go into the club and just sit there to stare at hot girls. Try to buy at least a couple of drinks, get a lap dance if it’s cheap enough or throw a few $1 bills onto the stage at your favorite performer. If you’re on a really tight budget, then you can always just stay home and “take care of” yourself.

#2 – Thou Shalt Be Respectful of Dancers

If you’re turning a girl down for a lap dance, try to be polite about it and respectfully turn her down. You can simply say no thanks and you can move on with your day. Don’t give her a reason, insult her or get annoyed at her for doing her job. These girls go up to guys and ask if they’d like a lap dance, that’s part of their job and how they make their money.

As a go-to line you can always say, “thanks but I just got here and settling in for now.” 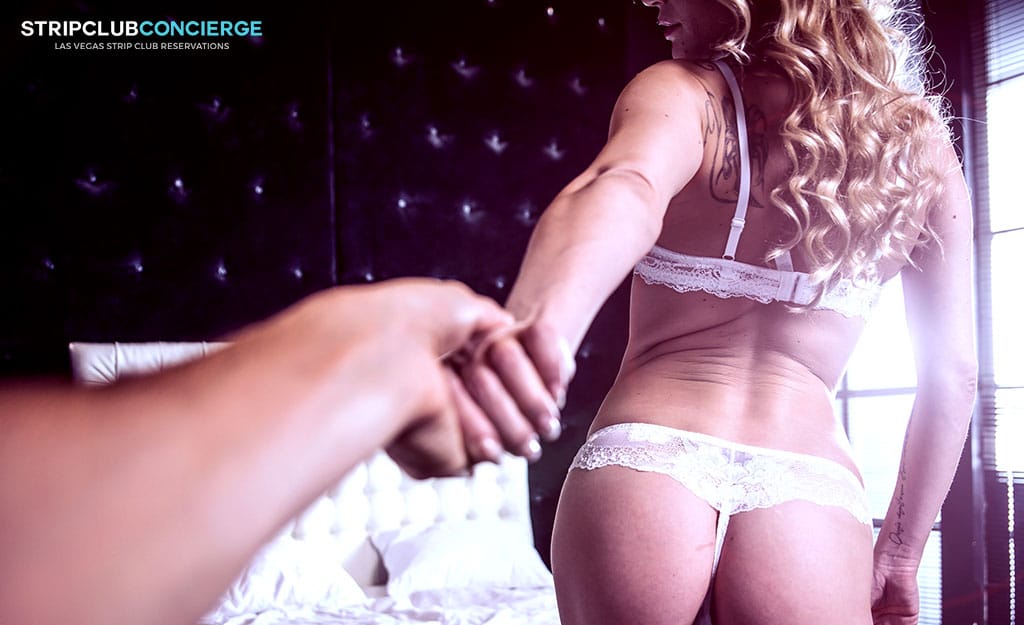 Have a firm line ready for the extra pushy strippers.

If you’re interested in getting some alone time with a girl, be prepared to spend some money. These girls aren’t there just to be eye candy. The dancers are there to make money, and these girls live off of the money that you tip them.

In addition, most clubs require them to split their tip money at the end of the shift toward the house fee. This is basically a mandatory tax the dancers pay for being able to strip in that venue.

Don’t think just because the girl’s hot and works in a strip club, you can corner her and sweet talk her into taking you into a private room. That’s not how that works. If you want some quality time with a girl you find attractive, you better be prepared to spend some real money in the VIP room. 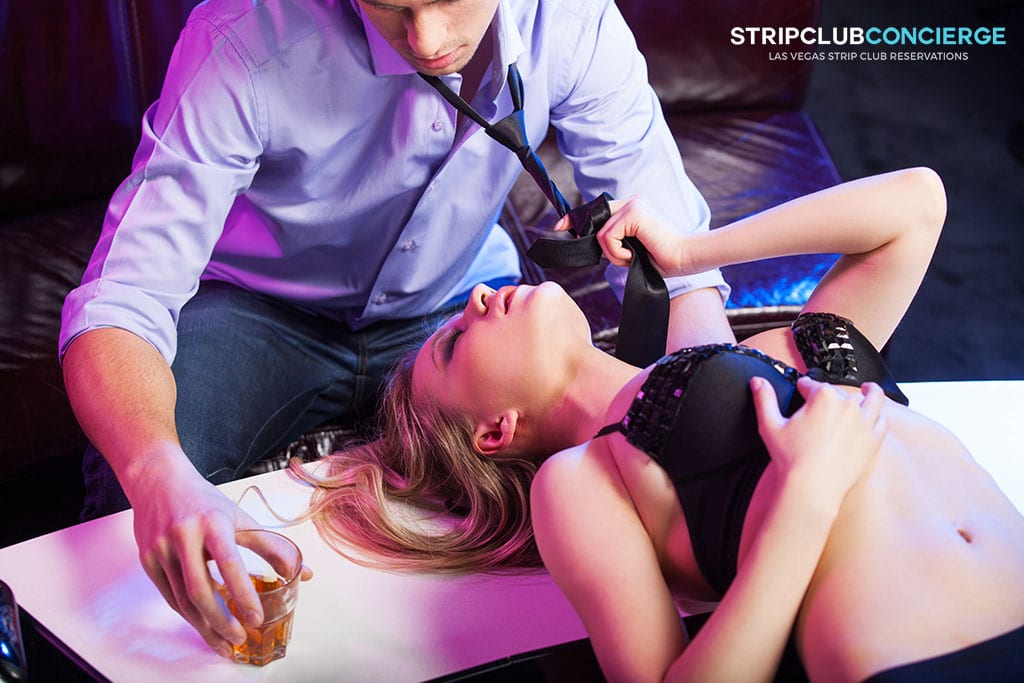 Coming in at only $20 each, you should always plan on buying a lap dance or two.

#4 – Thou Shalt Not Hog the Stage Seating

When you’re sitting against the stage in a front row seat, you’d better be tipping. This is premium seating at the strip club, and can require a handshake to the hosts on busy nights to obtain.

if you’re lucky enough to get there early and nab it first without a reservation, you should be having fun with the dancers and throwing some tips their way when they drop it.

It can be a small tip like $1 per song or more (they always appreciate more). Although if you’re just sitting in one of those front row seats without actually tipping, then the dancers and staff will start to think of you as a parasite.

If you hog the stage, and you’re just there gawk at women for free, you’re not doing the club any favors and you’re taking the seat of someone who could actually be tipping. It’s not technically against the rules, but it’s definitely a fast way to annoy the strippers and bouncers.

It could even ruin your chances of any kind of one-on-one session with your chosen girl. If you’re there strictly to watch, you may want to look into a private stripper service instead.

#5 – Thou Shalt Not Over Touch

Get to know the girl’s boundaries and rules when you’re getting a lap dance. Some girls don’t allow you to touch them at all and some clubs don’t even allow touching period.

However, some girls have pretty loose rules regarding touching and most will let you touch them as long as you pay for certain amounts of time. Just don’t start groping or touching away because you’ll probably get your hand slapped away the first time and if you keep doing it, you’re going to get escorted out of the club.

For those interested, we have another article that covers lap dance etiquette in particular. 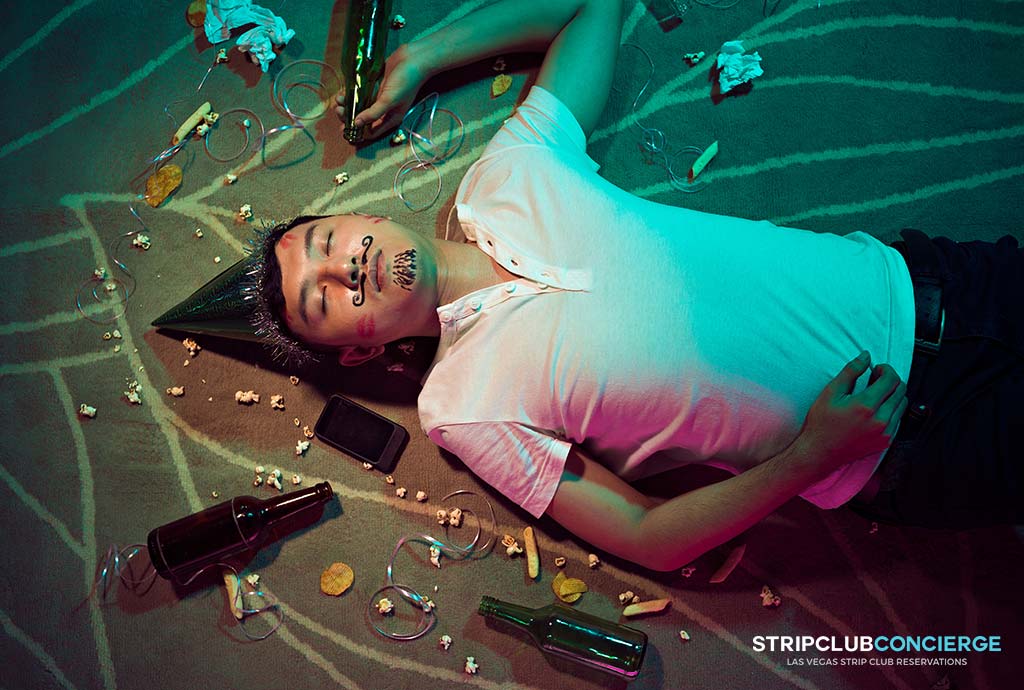 Our Suggestion: Choose a two drink package and keep it to that.

#6 – Thou Shalt Not Get Wasted

Don’t drink too much. We know how much fun everything is when you’re hammered but it’s only fun for you. It’s never fun for the sober people around you who have to deal with you.

Yes, strip clubs serve alcohol but good strip club etiquette says you should maintain a proper buzz, not drink to the point where you get yourself hammered and can barely function. When some guys get drunk, they start touching without asking and doing things they regret in the morning.

You also don’t want to wake up with remorse and look at your bank statements wondering why you spent so much money. Know your limits when it comes to alcohol and drink accordingly.

Our Two Drink Packages at all the top strip clubs in Vegas make it easy to limit your drinking to the two included drink tickets. We’ll handle your ride and your admission cost for free. Two less things to worry about.

See All Our Two Drink Packages

#7 – Thou Shalt Not Ask Strippers on a Date

Don’t ask the girls out on a date, especially if they’ve just met you. A strip club is not a dating service and it’s not a classifieds section.

These girls want to make money and provide entertainment while doing so. It’s not only impolite but actually rude to ask for a girl’s number, because the girl will sometimes assume that you think she is a private escort on the side. Its best to simply not do this, as you’ll get a bad reputation in the club.

Some bouncers have even been known to throw customers out and reprimand the girls for exchanging the digits. If you feel there is a real connection, its best to have her whisper her number into your ear and for you to remember it. Another bonus for moderating your alcohol intake.

Smooth Operator Tip: When it’s your first time at a particular club, find the management, bouncer, or host. Tip them all handsomely and ask who the wildest or hottest girls are. They’ll more than likely give you a little more freedom, as long as you’re within the rules of their strip club etiquette guidelines. 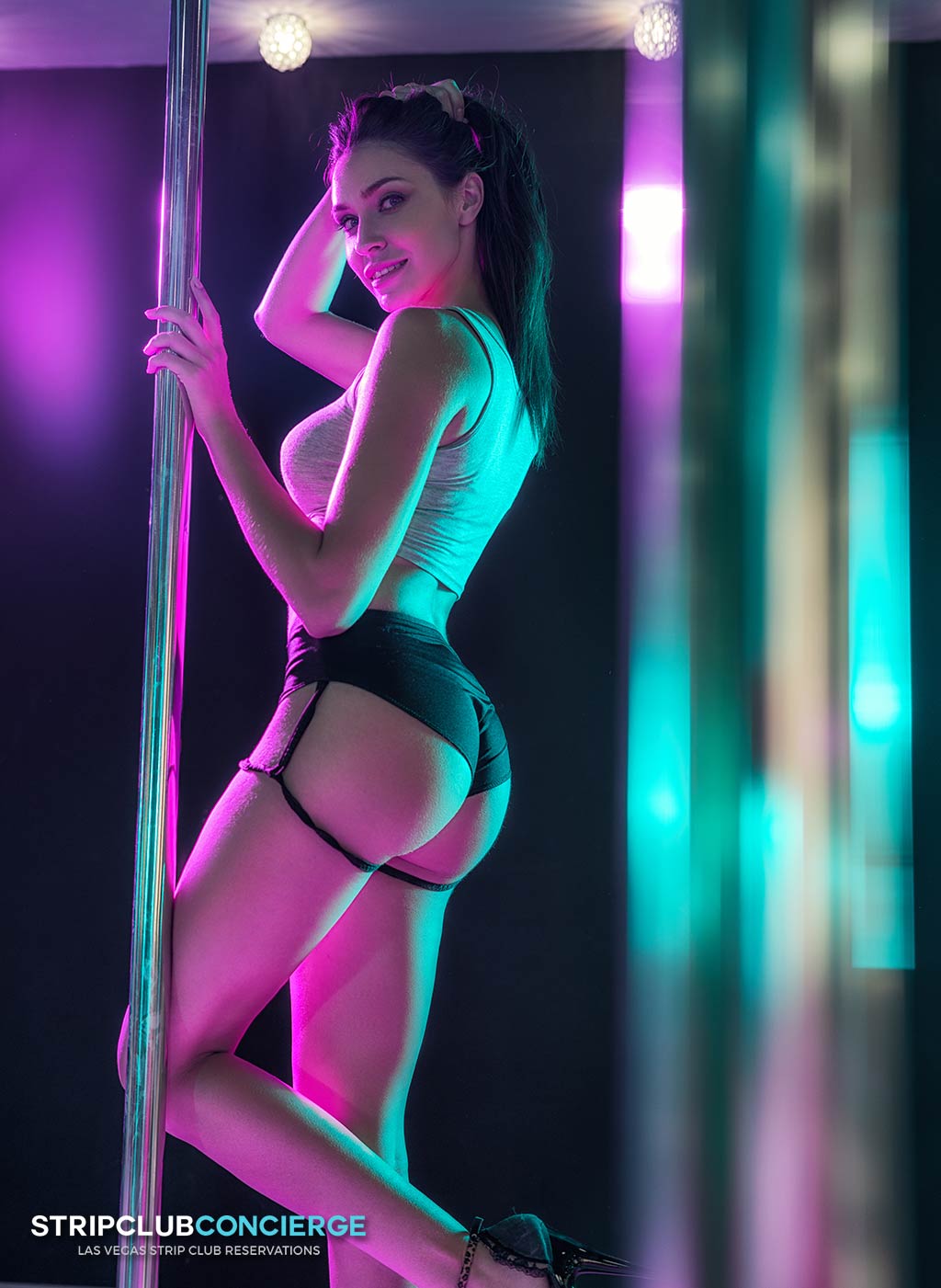 Logic seems to fly out the window when people are brand new to gentlemen’s club etiquette, and that’s why we’re trying to lay down some general ground rules for all strip clubs. Each strip club has their own rules though which will either be listed on their website or inside the club.

If you don’t know, simply ask. Especially if you’re having a great experience and plan to come back.

Try to look presentable and approachable. If you know you’re going out to the strip club, take a shower, brush your teeth and make sure you don’t have any obnoxious body odor. If a girl passes by you and takes a whiff of something fierce, what do you think the odds of getting a lap dance from her is?

Also, make sure you dress nice. You don’t have to dress up in an expensive ensemble but look presentable. The most popular look is business casual, but most strip clubs have their own dress code guidelines. You don’t need a suit and tie (unless you want massive attention), but you do need to look good if you want to catch the eye of the hottest girls on staff.

#10 – Thou Shalt Tip Often and Freely

Remember that almost everyone there is working for tips. Hardly anyone working at the strip club has a sizable salary or hourly wage, so everyone’s living off of tips. Tipping even modestly will secure you a level of respect in the strip club that will get you special attention for the entire night.

Did the DJ just play your favorite song for you? Leave $5 for them at least, so you have a better shot at getting some of your future requests played. The hot cocktail waitress that’s bringing your drinks? Make sure to leave her a generous tip too, because she’ll remember that. Guess who’s going to get their drinks before everyone else? On busy nights, you could have to tip the hosts working the floor in order to get the best seating locations in the main room or near the stage. Trust us, it’s worth it. Even a $20 will usually do.

If you can feel your pants tightening and you feel yourself becoming aroused, don’t act on it whatever you do. Don’t breathe on her neck, and don’t whisper things you’d like to do to her in her ear. it’s better to just keep your mouth shut and enjoy.

If it helps, try to think of the most unappealing thing you can – like those Christmas sweaters your parents would buy you on the holidays. It’s fine if you get aroused, but it’s never fine (at any strip club) if you make a scene and act on that arousal.

Control your excitement as well as you can.

When it comes to behaving according to proper strip club etiquette, it’s best if you use logic and common sense in any situation that may arise. Remember these commandments.

You can always contact us directly if you’d like more information about the rules of any strip club in particular. We’ll make sure you’re prepared and well taken care of. It’s just what we do.